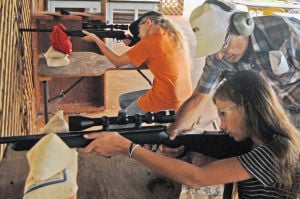 The 11 students registered for the summer program started off the week Monday in the forum at Eastern View High School receiving an overview of the program before spending Tuesday in the field, touring the county’s jail, courtrooms, the E-911 center and the CCSO’s Criminal Investigations Division (CID), said CCSO Sgt. Joe Curtis, who coordinated the program along with Corp. Marshall Keene.

On Wednesday, the teens learned about the CCSO’s police dog program and watched a demonstration, Curtis said.

The academy wrapped up back at EVHS Friday afternoon with a graduation ceremony with Culpeper Sheriff Scott H. Jenkins and a lunch catered by local restaurants Luigi’s and Ledo Pizza.

“We’re trying to touch on all aspects of law enforcement, from basic criminal law, to crime scene investigation to SWAT operations,” Curtis said. “We got the word out throughout the school year that rising ninth graders through seniors interested in law enforcement as a career should apply for the academy.”

Keene said the youth academy was developed in conjunction with the state Attorney General’s “Virginia Rules” program, an education program about the state’s laws and how it affects the commonwealth’s teens.

“They created the curriculum, so it fits right in with the state’s standards of learning for their grade levels,” Keene said.

Keene said the academy is one of several youth outreach programs the CCSO has established since Jenkins was elected county sheriff.

“Along with the summer youth sports camps, it’s designed to build and foster the relationship between the Sheriff’s Office and the kids in Culpeper,” Keene said.

“They were very attentive, because they all wanted to be here,” Curtis said. “As part of the application, we had them write an essay explaining why they were interested in the course. They have a lot of questions about the law and how it pertains to them.”

Of course, the youngsters responded best to the field trips and hands-on experiences, like collecting evidence at a mock crime scene set up by the CID and target shooting at the Cedar Mountain Youth range.

“I was pretty good with the rifle, but not so much with the shotgun,” said Megan Kreh, a rising junior at CCHS. “I signed up for the course because I really want to go into law enforcement.

“I just really like helping people, and this helps you get experience and see what’s involved,” Kreh said.

“I really liked collecting the evidence and seeing how all the pieces of the puzzle fit together,” she said.

CCHS freshman Philip Temple said he is considering a career in law enforcement.

“I’m interested in maybe getting into forensics,” Temple said. “Police officers have a really important job, and I didn’t really know that much about it. I just took it for granted.”

CCHS junior Savannah Raines said she returned this summer to take the class for a second time.

“It makes you realize how much work they have to do,” Raines said. “I came back because it’s a lot of fun, and because I want to work for the FBI one day.”

MT2 is well known industry wide for being the nation’s #1 largest professional provider of the full scale of outdoor/indoor range environmental, maintenance and construction services; proven at over 3,000 ranges, in the past 20 years and is an A+ BBB accredited business, in all 50 states from our nationwide office network. Including:
• Comprehensive OSHA training program
• Knowledge of EPA regulations
• Our “Never Generate Hazardous Waste Guarantee.”